The Washington Post has an interesting piece exploring the “hollowing out” of the middle class, a phenomena that North Carolina — and the Triad area of North Carolina especially — has been at ground zero at.

In 1979, middle-skill jobs accounted for 57 percent of the jobs in the U.S. economy, according to calculations by David Autor, an economist at the Massachusetts Institute of Technology. By 2009, the share was down to 46 percent. If the share had not changed over those 30 years — if it had stayed at 1979 levels — there would be 15 million more middle-skill jobs in America today.

I actually read this story in The News & Record’s careers section this morning, but can’t find it online. The piece tells the story of Ed Green, a hard-working Winston-Salem man who works two jobs to make ends meet — and send his kids to college.

(Side note for my journalism and N.C. State friends: One of the journalists credited on the piece, Producer Dwuan June, used to work at the Charlotte Observer and is an NCSU graduate. In college, I  drove down to Charlotte one weekend to hang out with him at the Charlotte Observer and get some advice no perspective on whether I might want to go into newspapers. That was probably 1990 or 1991, long before the Internet tsunami wiped out the economics of traditional mass media.) 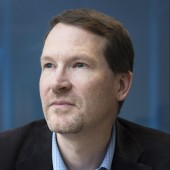